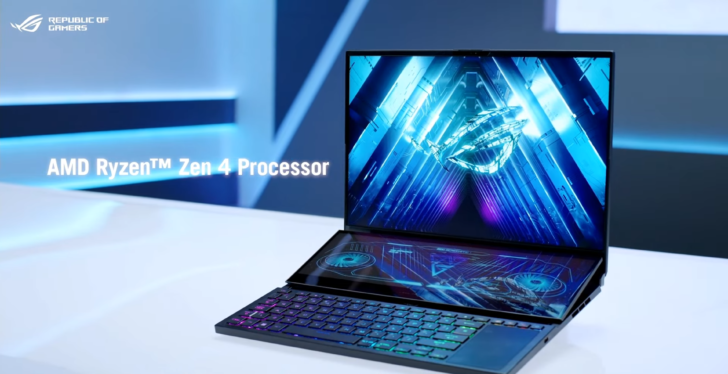 The revelation came during the unveiling of the 2023 ROG Zephyrus DUO 16 laptop which will be one of ASUS’s flagship designs for the year based on the latest AMD Ryzen 7000 Laptop CPUs. We know that AMD is preparing its own high-performance chips that will offer specs similar to the Zen 4 desktop CPUs known as Dragon Range.

Branded under the Ryzen 7000-HX family, the new CPUs are said to offer up to 16 cores and 32 threads with up to 76 MB of cache. These are virtually the same specification as the AMD Ryzen 9 7950X. The Dragon Range Ryzen 7000 flagship processor will also support PBO (Precision Boost Overdrive), allowing users to overclock the chip which already comes in a 55W+ package design.

ASUS claims that thanks to the improved cooling on its new ROG Zephyrus DUO 16 laptop, it can enable up to 10% better performance with the same chip which can then match the AMD Ryzen 9 7950X Desktop CPU. Following is the specific statement from ASUS:

“In our testing, we were able to boost performance by up to 10%, getting within the range of the Ryzen 9 7950X desktop chip.”

Up To 10% performance increase with PBO in Ryzen 7000 ‘Dragon Range’ HX mobile.

ASUS: “In our testing, we were able to boost performance by up to 10%, getting within the range of the Ryzen 9 7950X desktop chip”. pic.twitter.com/feqZkLi28e

Now, this is definitely a big deal and we are seeing similar results from Intel’s Raptor Lake-HX CPU lineup which more or less matches the fastest current-gen desktop chips. But it looks like ASUS is really acknowledging AMD’s superior performance per watt which might lead to better thermals & lower power draw than Intel’s latest lineup.

The AMD Dragon Range CPUs will be aimed at the high-performance segment with more cores, threads, & cache than what AMD has offered us previously while Phoenix Point will be aimed at the thin and light laptop segment. The Dragon Range CPUs will have a TDP rating of around 55W+ while Phoenix Point will have TDPs of around 35-45W. The 55W TDP is for the base configuration and we can expect the chip to be configurable up to 65W for laptop designs with high-end cooling and bigger form factors.

Considering that AMD’s current laptop lineup peaks out at 8 cores and 16 threads, AMD will be targeting up to 16 cores and 32 threads with its Dragon Range family of Ryzen 7000 CPUs. The CPUs will also feature more cache of up to 80 MB versus just 20 MB featured on AMD’s current fastest laptop chip, the Ryzen 9 6980HX. Considering up to a 74% improvement versus Zen 3 in multi-threaded applications at a 65W TDP threshold, we can see a huge gain in performance and that would also exceed Intel’s existing Alder Lake-HX lineup which features up to 16 cores and 24 threads .

The new Dragon Range CPUs will feature a die similar to the Raphael SKUs on the desktop AM5 platform as such, they will also carry the 2 RDNA 2 Compute Units. The CPUs will be featured in various enthusiast laptops with high-end discrete graphics cards from all vendors but primarily NVIDIA & AMD.