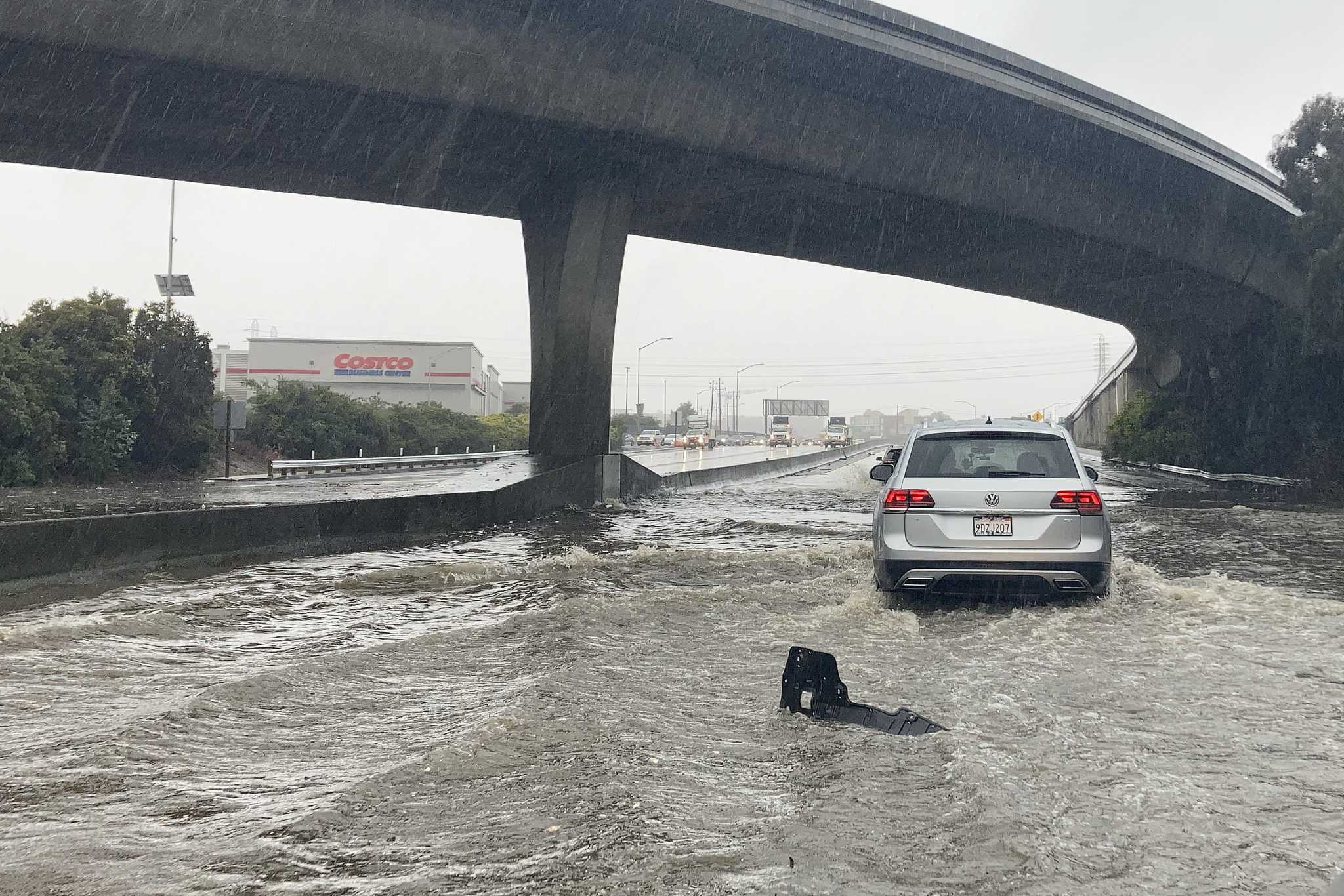 The atmospheric river pummeling the Bay Area is causing widespread flooding and even mudslides throughout the region. Residents are being encouraged to limit travel and check road closures before heading out, if they must drive. The National Weather Service issued a flood advisory that is in effect until 11:45 am Saturday. This a developing story and will be updated with road closures:

In Santa Cruz County, however, Caltrans just announced State Route 9 is closed from Vernon Street to Glengarry Road after a number of mudslides swept over the road. There is no estimated reopening time.

Jan. 1, 7 am With the New Year dawning clear and cold across most of the Bay Area, flood waters are finally receding, but a few arteries in the region are still closed. The biggest among them is a stretch of 580 between San Leandro and Hayward; it’s been closed since about 7 am Saturday, with CHP hoping to reopen it in a few hours.

Niles Canyon Road is inaccessible between Fremont and Sunol. It was flooded Saturday and is still being pumped free of water. Highway 92 in the Crystal Springs Area is also closed due to earlier flooding leaving debris on the roadway.

Further south, a number of spots along Highway 1 in the Big Sur area are closed due to mudslides. Check traffic apps before leaving home, as your usual routes around Northern California today may be inaccessible.

A shelter-in-place order due to heavy flooding has been issued to Watsonville residents living along Bridge Street and in surrounding areas, the Watsonville Police Department announced. Residents are advised to stay in their homes, as driving on flooded streets is highly discouraged. City crews are working to reduce water levels on streets in the area.

Heavy flooding has prompted a reverse 9-1-1 call to go out to residents living in the areas along Bridge Street and surrounding neighborhoods.

Residents should shelter in their homes. Driving on flooded streets is highly discouraged and may lead to becoming stranded. pic.twitter.com/haVscsPkdc

Northbound lanes of Highway 101 in South San Francisco have reopened after being closed for several hours due to flooding, California Highway Patrol announced. Southbound lanes in the area remain closed.

California Highway Patrol is currently assisting several cars and a big rig truck whose drivers allegedly ignored the road closures in place on Highway 101 and subsequently became submerged or stuck on the flooded highway.

According to CHP, the big rig is stuck on a guardrail at the South San Francisco exit and will need to be towed away. Drivers are being implored to avoid the area and not drive through the road closure.

We have a road closure in place on US-101 for public safety reasons. When one driver chooses to drive through the closure & others follow, you now stretch the resources even thinner. We are currently having to rescue the submerged vehicles in addition to all other calls for service. pic.twitter.com/QMQ40J9lyU

A mudslide has impacted the westbound lanes of I-580 near Dublin in Alameda County, blocking the far right lanes east of Eden Canyon Road. Motorists should expect delays as crews work to clear the road.

#TRAFFICALERT: The far-right lanes on WB I-580 east of Eden Canyon Rd. near Dublin #AlamedaCounty are blocked due to a mudslide. Crews are working to clear the debris. Motorists should expect delays. For live traffic conditions?–?️https://t.co/2qzyucWAwN #CAwx pic.twitter.com/fiBMhyHV1s

State Route 9 is closed from Bear Creek Road to Riverdale Boulevard in the Boulder Creek area of ​​Santa Cruz County due to mudslide activity.

UPDATE #1: Photos from #StateRoute9 slide in #SantaCruzCounty. Contractor will be on scene tomorrow to begin work. Time of opening to be determined after further assessments by Caltrans engineers with maintenance team support. https://t.co/WrZom8V6CU pic.twitter.com/jsDDx5antA

Dec. 31, 1:22 p.m Evacuation orders have been issued in Felton Grove and Paradise Park in Santa Cruz County. Those in the area are encouraged to move to higher ground for safety. Check evacuation zones here.

EVACUATION ORDERS HAVE BEEN ISSUED FOR FELTON GROVE AND PARADISE PARK. PLEASE MOVE TO HIGHER GROUND FOR SAFETY.

Check your zone at https://t.co/s5GvnC3vMN.

Dec. 31, 12:23 p.m Multiple mudslides have been reported in San Francisco and drivers should avoid certain roads. Avoid the area of ​​O’Shaughnessy Blvd & Malta Drive, the 400 Block of Ulloa Street and the Bernal Heights Park Parking Lot. Follow the San Francisco Department of Emergency Management for updates.

ALERTSF: Avoid the area of ​​400 Block of Ulloa Street due to Mudslide. Emergency crews are on scene.

The National Weather Service reported that the city has already hit a record for rainfall today at 2.96 inches, beating the previous record in 2005 at 2.12 inches.

Precip records in downtown San Francisco go back to 1849. Daily precip record for today was 2.12 inches in 2005. So far today we are at 2.96 inches and counting. A record breaking rain to finish 2022!

US-101 s/b & n/b lanes will be closed indefinitely in So. San Francisco due to major flooding.

All traffic should use I-280 as an alternate route. Unknown ETO at this time. Caltrans crews already on scene. Please avoid area! pic.twitter.com/gIubn88T1x

Dec. 31, 10:05 am The Fremont Police Department reported that Niles Canyon is closed due to a mudslide. It could reopen by noon, but Caltrans is still evaluating the damage. Roadways in Belmont are experiencing flooding and motorists are encouraged to steer clear of Harbor Blvd. and parts of Ralston Ave.

Coastal flooding has closed the northbound lanes of SR-35 at Sharp Park Rd in Pacifica, the Pacifica Police Department reported.

Dec. 31, 7:57 am Sections of Highway 92 are flooded from Skyline Blvd to Main Street in Half Moon Bay, Cal Fire reported Saturday morning, and that section of the highway has been closed. No reopening time has been set.

HAPPENING NOW: Highway 92 is flooded in sections from Skyline Blvd to Main Street in @CityofHMB. That section of highway is being shut down. No estimated time to reopen. #CaWx pic.twitter.com/4Oi70wenH0

Parts of Highway 1 have been closed at multiple points due to flooding. In Monterey County, it’s closed due to rockslides from Ragged Point to approximately two and one-half miles south of Big Sur, Caltrans reported. There is no estimated reopening time.

#Highway1 is closed from Ragged Point to approximately two and one-half miles south of #BigSur in #MontereyCounty due to rockslides. Caltrans will assess conditions at daylight before cleanup can begin. There is no estimate for re-opening. Road information: https://t.co/86BJHWuSgc

Route 84 was shut down in part of Alameda County between Old Canyon Road in Fremont and Main Street in Sunol due to a mudslide and rockslide Friday. The road reopened by 8 pm There was also a closure of Highway 9 between Waterman Gap and Upper Highway 236 in Santa Cruz County that has since reopened.

The National Weather Service expects the worst of the storm to hit late Friday and into Saturday morning. The storm brings with it the possibility of gusting winds, downed power lines, falling trees and landslides. Because so much moisture has already seeped into the soil this week, it is possible that further saturation will cause widespread mudslides, especially in wildfire burn scars that have fewer sturdy tree roots keeping the soil in place.

SFGATE managing editor Katie Dowd contributed to this report. This is a developing story.