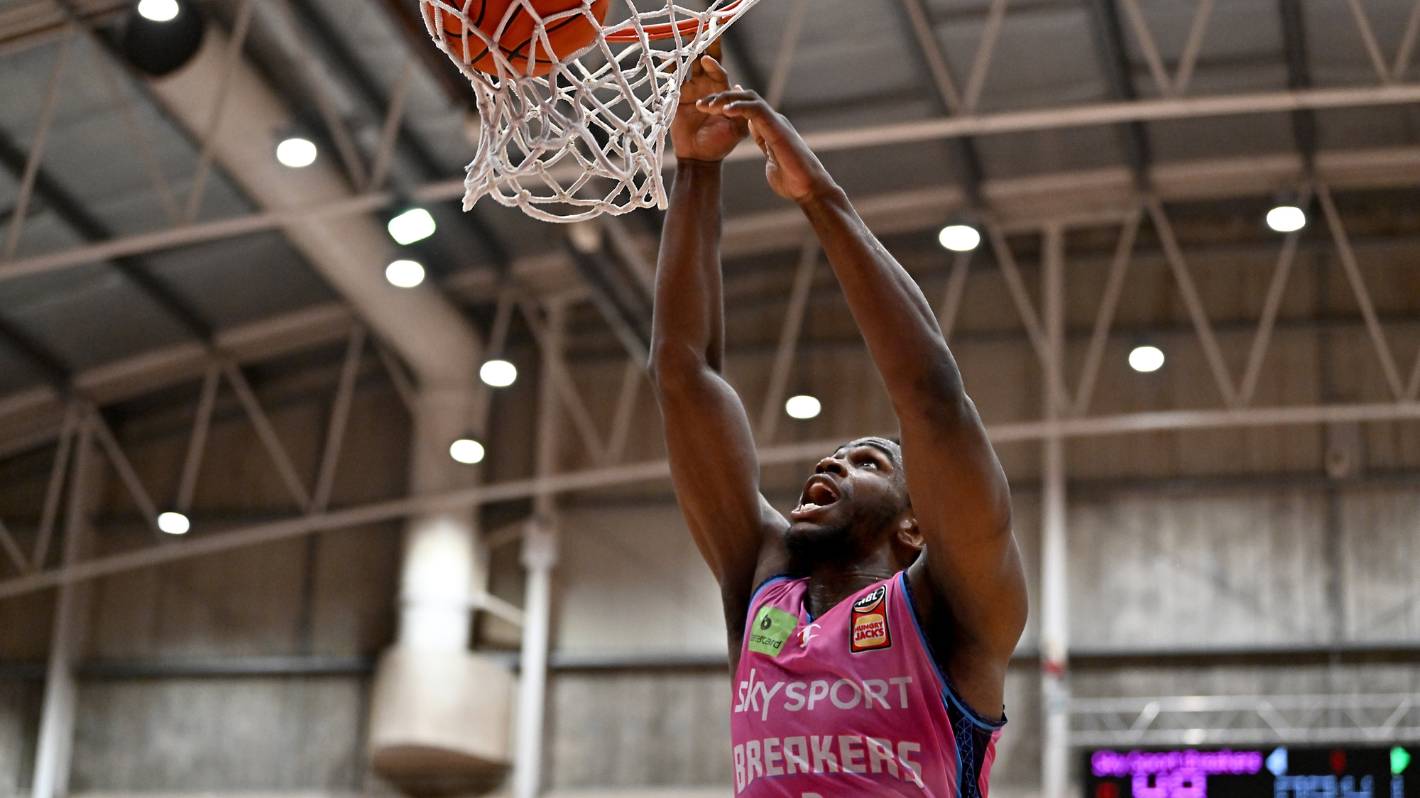 Jarrell Brantley throws down a big dunk for the Breakers in the win over the Wildcats.

It was an anxious experience but the ultimate agony belonged to the Perth Wildcats as the Breakers finally snapped their three-game losing streak in a 97-94 thriller.

Boosted by the return of Next Star import Rayan Rupert, the Breakers left the New Plymouth crowd hanging until the final play with Perth’s Brady Manek getting a look at a buzzer-beating equalizer from near the baseline that bounced off the rim.

The much-needed win for the Breakers – the club’s 12th of the season – at TSB Stadium on Wednesday night consolidates second spot on the National Basketball League ladder for the Kiwi side and with Rupert making a splash in his limited return and Rob Loe returning, the season is firmly back on track after a pre-Christmas slump.

Barry Brown Jr was also back to his best with a team-high 23 points and six assists that oozed class.

Wednesday’s encounter between the long-standing rivals was always going to have a bit of spice to it given the controversy over the Breakers’ cheap Instagram shot at Tall Blacks star Corey Webster late last year, plus his brother and former Breaker Tai Webster also joining him in the Wildcats for the first time after linking with Perth last week.

And while the on-court fireworks didn’t get going early, an animated Breakers coach Mody Maor was called for a technical foul late in the opening quarter as a frustrating start for his side saw them trail 22-17 at the first break.

If Maor’s aim was to fire up his own side, it worked.

Rupert made his long-awaited return from injury, off the bench in the opening quarter, after being sidelined with a left wrist injury suffered way back in mid-November.

The teenage French sensation’s impact on the match was limited as his minutes were managed on his return but he really got going shortly before half-time and showed his class and what an impact he will have on the back end of the season.

Izayah Le’afa had some nice touches in the second quarter to have 13 points by halftime, as did Brown Jr, but it was Rupert that really ignited his team.

He drilled his first shot, from the outside, as a resurgent Breakers charged back into the game during the second quarter after being behind by as much as ten early in the second.

An impressive drive to the hoop plus the one delivered another three-point play for Rupert soon after, and that was quickly followed by a big crossover dunk that got the crowd on its feet.

It wasn’t just the 49-48 scoreline that was tight at halftime. The Breakers shooting percentage just pipped the Wildcats at 56% to 54% and the New Zealand team also held a slight edge in rebounds at 18-14.

The Wildcats held significant edges from the free throw line at 10/11 against the Breakers 1/3 and held the advantage from beyond the arc at 5/8 to the Breakers 3/11 at halftime.

By halftime, Wildcats coach John Rillie also had a technical to his name as tensions continued to rise in a match where both teams needed the win.

The Breakers hit the lead briefly in the early stages of the third quarter and a big three from Tom Vodanovich late plus an and one from Brown Jr helped them regain it before a blitz to end the quarter.

A second three from Rupert was followed by a layup from Brown Jr before another and one from the NBA-bound Rupert to give the Breakers a 14-point run that helped them lead by nine at the final break.

The lead was cut to three with five minutes to play until Jarrell Brantley and Le’afa hit critical threes to extend the lead back to nine.

But Corey Webster fired back with consecutive shots from outside the arc to close the gap to three.

It was tight down the stretch with Bryce Cotton – who scored a game high 32 points – bagging a big three for the Wildcats to keep them in the contest.

A back court violation from the Wildcats should have handed the win to the Breakers, but they made a mess of the inbound pass and Perth closed the gap to two with 11 seconds left on the clock.

Brown Jr was fouled and made just one to give the Wildcats one last look from beyond the arc that Manek – who was a ball of energy all night with 20 points – couldn’t make.

Tai Webster was stripped on the sideline for his new team – after recently returning from Turkey – but did not enter the game.