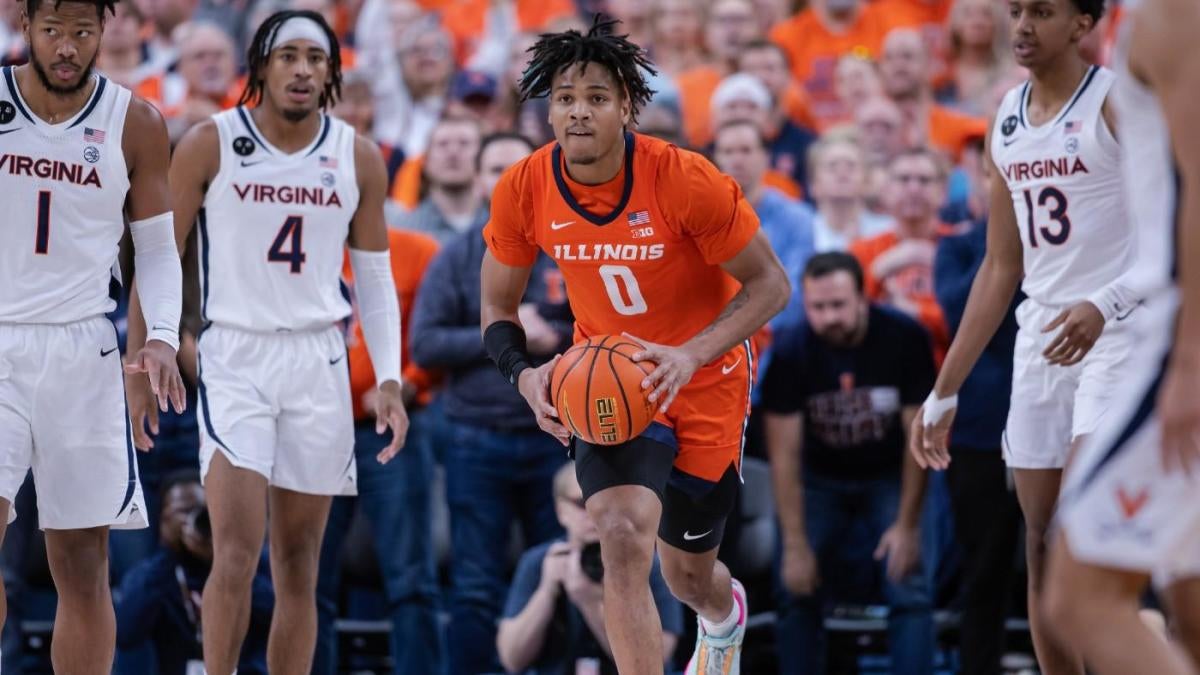 Nearly 2,000 — yes, 2,000! — Division I basketball players hit the transfer portal last offseason. The mass exits and entrances across the country meant there was of course bound to be some players left in tricky spots, yet many have clicked right in with their new homes and are producing at a high level.

David Cobb looks like something of a wizard in fact if you go back to look at his preseason transfer rankings — a lot of the big names atop the rankings are producing — but I wanted to revisit the rankings with a refresh now that we’re a few months into the season. Shake the dust off and see where things have started to settle, you know?

I tried to do a top 10 list but there were too many deserving players worth mentioning so a top 20 (with a few honorable mentions) is the way I went.

These rankings factored in scoring, rebounding and assist production — typical counting stats — but they also factored in team success, the efficiency in which a player is producing and the overall importance of that player in the grand scheme of their respective team. Therefore, these rankings are 100% correct. So please if you disagree just tell yourself you’re wrong and keep scrolling.

At Texas Tech Terrence Shannon was a sharpshooting lefty, an All-Big 12 because of his contributions to elite defenses and his ability to score it inside and out. At Illinois, he’s developed and sharpened those skills into a more complete player Illinois can turn to as its No. 1 option. He’s averaging a career-high 17.8 points, a career-high 5.4 rebounds and a career-high 2.9 assists per game while shooting a career-best 57% from 2-point range and pacing the Illini, most likely, to the NCAAs.

It was a pretty even split at the top so I think of Davis more as a 1B in this ranking than a No. 2. He’s been better than expectations — and expectations were sky-high. The reigning AAC Player of the Year has breathed new life into Penny Hardaway’s program as a true lead guard who can score and facilitate among the best in the country.

Williams is having one of the best and most underrated seasons in college basketball. The Murray State transfer has seamlessly fit right in with his long-time coach, Matt McMahon, who brought him over to the Tigers after leaving Murray State. Williams is averaging the second-most points among all players in the SEC and the sixth-most rebounds on the year for an LSU team that is 12-1 on the year.

First-year coach Dennis Gates brought Hodge over to Missouri with him when he left Cleveland State and the jump to the SEC has been a success thus far for both Gates and Hodge. Hodge is not only producing like he did in the Horizon, but even better than he did in the mid-major league; he’s putting up career highs in points (16.5), steals (2.8), rebounds (3.9), 3-point percentage (41.8%), and assists (2.2) while leading Mizzou to its best start (12-1) since the 2013 -14 season.

Sherfield produced at Wichita State before making a leap into stardom at Nevada the last two seasons and that has continued at his latest stop in Norman, Oklahoma with the Sooners. He ranks third among all Big 12 players in points per game and first among all power conference players in 3-point percentage (among those who have taken at least 40 attempts on the season) with a scorching 52.2% hit rate from deep. OU’s record at 9-4 isn’t much to write home about but two of those were by a single point, another by four points and another to top-15 ranked Arkansas. Sherfield’s got the Sooners back in business tracking to be a tourney team in Porter Moser’s second season.

With no. 1 recruit Nick Smith in and out of the lineup with a knee injury and Trevon Brazille done for the season, Arkansas has hardly missed a beat thanks to the star turn of Council, a Wichita State transfer. Council is averaging a career-best 17.9 points per game and operating in Arkansas’ guard-friendly system as the No. 1 option on a team that lacks some punch without Smith and Brazille. This team has some young pieces that can grow as the season progresses to complement Council nicely, but he’s taken the opportunity and run with it and looks like an All-SEC performer early this season.

There were some questions about how Omier’s game might translate going from Arkansas State to Miami but he has answered them all. Omier has asserted himself as one of the most important pieces for the Hurricanes since his arrival on a team that is 13-1 and could challenge for an ACC crown. His presence on the interior as a rebounder has given Miami a presence it lacked last season, particularly on the offensive glass.

Nolley’s one of the few on this list who is a multi-stopper — he started his career at Virginia Tech, spent time at Memphis and is now at Cincinnati — and thus far his last stop may have been his best one. He’s averaging a career-high in 3-point shooting percentage and 2-point shooting percentage for the Bearcats who have won seven of their last nine after a shaky start in a brutal nonconference slate. Cincy could be pushing for a tourney bid in Wes Miller’s second season and Nolley’s development as an efficient scorer and producer could play a huge part in that.

Xavier has reeled off eight-straight wins including a win over previously undefeated UConn to emerge as one of the best-coached teams in college basketball under Sean Miller. The Musketeers’ usage of Souley Boum, a UTEP transfer, is the best singular example of the Xs and Os wizardry of this staff. Boum is making a career-best 46.9% from 3-point range and 52.9% from 2-point range and this staff has unlocked his best assets as a facilitator, scorer and slasher. His do-it-all skill set would make him one of the most valuable transfer portal additions for any team.

LSU transfer Brandon Murray was among the many reasons there was optimism surrounding the Georgetown program and a potential rebirth this season. While Murray has met expectations — he has quietly produced at a stellar level as a scorer, creator and outside threat — the Hoyas remain the laughing stock of the Big East having now lost 32 straight regular-season conference games. Had to ding Murray a bit because his team is not doing well, but individually he is having a great season even if the situation around him is a total mess.

During his time at NC State, Bates was a shot-blocker who didn’t do much else. But at Butler he has become an efficient scorer to boot and one of the most valuable big men in the Big East because of what he can bring on both sides of the ball. His 13.5 points per game is nearly 4 points per game better than his career-high in a single season at NC State and he continues to be a shot-swatter specialist. This season his block rate of 7.7% is top-60 nationally.

A three-time All-Conference USA performer, Young has stepped in at Maryland as a plug-and-play producer who leads the time in scoring and assists. Maryland’s hot start has fizzled a bit — it has lost four of its last six games — but Young’s importance to the team’s rebuild in Year One under Kevin Willard cannot be overstated. The team seems to go as he goes.

His one-and-done season at Memphis was borderline disastrous, but Bates, once considered the best basketball prospect in the world, has revitalized himself at Eastern Michigan this season. He’s scoring at a high level and doing it efficiently, albeit against lesser competition he faced at Memphis. Bates’ season has put him back on the NBA Draft radar as a possible first-round pick after serious struggles at Memphis a year ago.

Morehead State transfer Johni Broome was a two-time All-OVC standout who also won DPOY honors with the league and wouldn’t ya know it, he continues to put up similar production under Bruce Pearl at Auburn. His scoring has taken a slight step back, but his shot-blocking and offensive rebounding remains stellar on a team that desperately needed him to be a force this season on that front.

Hopkins couldn’t carve out a role for himself at Kentucky in his one season but at Providence, the former top-40 recruit has found a home in which he can excel. After putting up 2.1 points and 1.4 rebounds per game at Kentucky playing about 6 minutes per game he’s throwing up close to 16 points and 10 boards per game for the Friars as a starter.

Alabama has a way of unearthing big talent from the mid-major ranks and Sears, an Ohio transfer, is just the latest find. He’s been a stellar sharpshooter next to true freshman superstar Brandon Miller who can hit the 3 at a high level and has added some playmaking and creation to boot. Alabama plays with great pace and embraces defense, so Sears has been a perfect fit for what Nate Oats and his staff are trying to accomplish.

After collapsing during a game with Florida late in 2020, it seemed as if Johnson’s playing career was over. But two years later he’s not only playing again — but thriving — for a remade Kansas State program under first-year coach Jerome Tang. He’s fourth among all Big 12 players in scoring this season and seventh in rebounding as K-State has raced out to a 12-1 start — its best since the 2016-17 season.

Scheierman hasn’t been a total world-beater as people might have expected and Creighton hasn’t been the class of the Big East as many thought it would be in the preseason. But Scheierman has nevertheless been a solid transfer addition and Creighton’s still got the goods to be one of the best teams in the sport. Scheierman’s length and scoring gives the Bluejays a terrific rebounder who can help space the floor and create, and I’m expecting him to continue to grow in his role as the season progresses.

Reigning champion Kansas lost a lot of pieces from its title team, but McCullar’s addition from Texas Tech has kept the Jayhawks pacing as one of the best not only in the Big 12 but in the country. KU is 12-1 on the year and using McCullar as an important rebounder, critical to a team that lacks a ton of size in the frontcourt. McCullar’s always been a stellar defender and that has continued during his time at KU, but his rebounding and 3-point shot have made him even more valuable addition as KU looks to repeat as NCAA Tournament champion.

After three seasons at Kentucky serving mostly as a part-time player, this season Brooks is putting up career numbers almost across the board. The Huskies have still had some struggles this season and don’t look quite ready to be a tourney contender, but Brooks’ evolution into a top-level scorer — he is fifth among all Pac-12 players in points per game — is a development worthy of recognition.