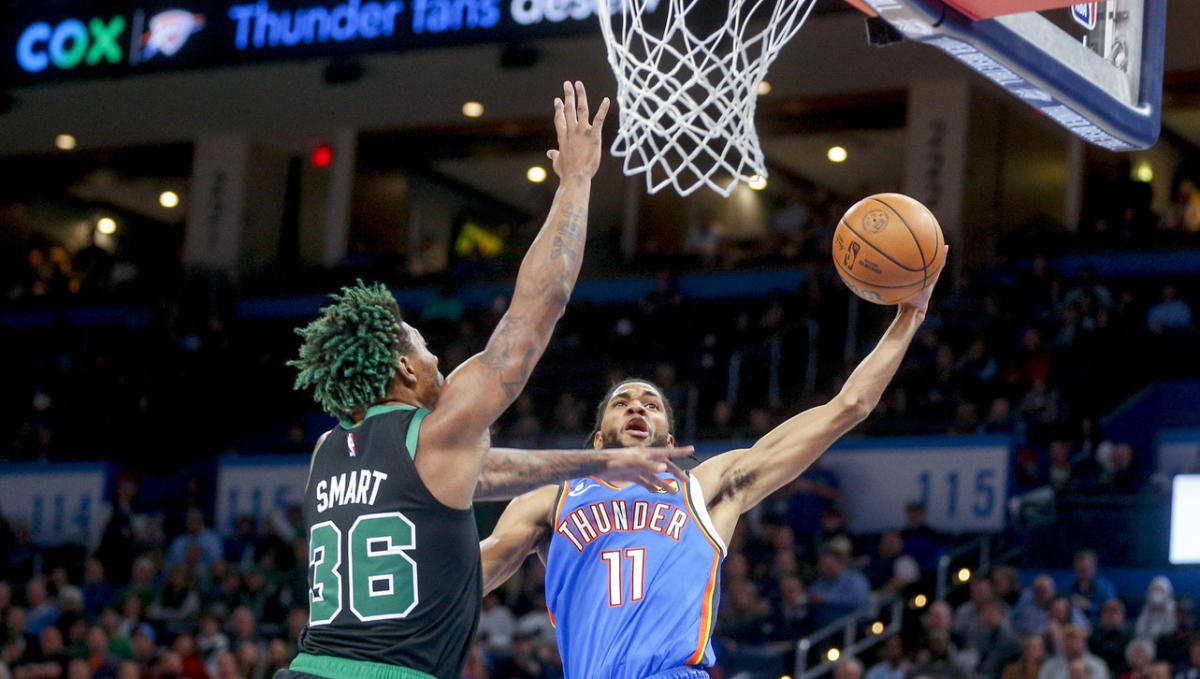 The Boston Celtics’ four-game road trip is off to a dismal start.

After dropping Sunday’s game in Denver, the C’s were outclassed by the Oklahoma City Thunder on Tuesday night, 150-117. OKC led by as many as 37 points against a sluggish Boston team that lost its first game at Paycom Center since 2016.

The Thunder put up 74 points in the first half, the most the Celtics have allowed this season. Their 48 third-quarter points were a franchise record and their 122 points through three quarters marked the most allowed by the C’s in franchise history. Oklahoma City accomplished that feat without its best player Shai Gilgeous-Alexander, who was a late scratch due to a non-COVID illness.

Frustrations boiled over late in the third quarter as Celtics guard Marcus Smart earned his second technical foul and was ejected. Jaylen Brown (29 points) and Jayson Tatum (26 points) were the only bright spots for the C’s, who were without a big man Robert Williams (injury management). Payton Pritchard tallied 17 points in 14 garbage-time minutes.

Seven Thunder players scored in double figures as the team shot a ridiculous 59.2 percent from the floor and 50 percent (20-for-40) from 3-point range. Josh Giddey led the way for Oklahoma City with 25 points while Luguentz Dort added 23. Tre Mann, Isaiah Joe, and Jalen Williams each contributed 21 points.

Here are our takeaways from the Celtics’ worst defeat of the season so far, which brings them to 26-12 on the campaign. Next up is a trip to Dallas to take on Luka Doncic and the Mavericks on Thursday night.

It’s no secret that this Celtics defense has paled in comparison to last season’s dominant group. Their issues have never been more clear than in the first two games of this road trip.

Their 123 points allowed to the Nuggets on Sunday was the most they had allowed in regulation this season… until Tuesday. It took OKC just three quarters and some change to top that mark. His 150 points were only 10 away from tying the record for the most points ever scored in a game against the Celtics, and it was only the third time the C’s have allowed 150 or more points in franchise history.

The Celtics looked lackadaisical on defense from the opening tip. They allowed 40 points in the second quarter and failed to make the necessary halftime adjustments as they allowed 48 in the third. While the Thunder undoubtedly deserve credit for their shot-making, there was an obvious lack of energy and effort on the other side.

One of the most notable numbers from the blowout was OKC’s 70 points in the paint, the most against the Celtics this season. The previous high was 68 by the Lakers in last month’s overtime game. It’s fair to say Robert Williams was missed, although Boston’s defensive woes go far beyond the big man’s absence.

No help for the Jays

Brown and Tatum were the only starters with double digits in the scoring column. Malcolm Brogdon had 17 points off the bench, but his shooting woes continued as he was just 4-for-12 from the floor. Pritchard scored his 17 on 7-of-13 shooting when the game was already well out of reach.

Celtics players not named Jaylen Brown, Jayson Tatum or Payton Pritchard shot 14-for-43 (32.5 percent). Al Horford had no answer for the Thunder defensively and contributed only two points. Smart had seven points before his third-quarter ejection and Derrick White had eight points on 2-of-8 shooting (1-for-6 from 3).

The supporting cast has been inconsistent as of late, and they’ll need to turn it around in order to keep up with Doncic and the Mavs on Thursday.

Sunday’s loss to the Nuggets was the Celtics’ sixth game with a 3-point percentage under 30% in their last 10 games. They hit that 30% mark on the nose in Tuesday’s defeat.

Their continued struggles from long range was a difference-maker along with their porous defense. OKC had the same number of 3-point attempts (40) but hit eight more of them (20). Pritchard led the Celtics with three 3-pointers and only played 14 minutes. Both Brown and Tatum were 2-for-7 from beyond the arc.

The C’s should find their groove again from 3 at some point, but their recent woes are alarming. Many of their missed 3s have been wide-open shots. Perhaps it’s a sign they’ve been far too reliant on the 3-ball to be successful this season.