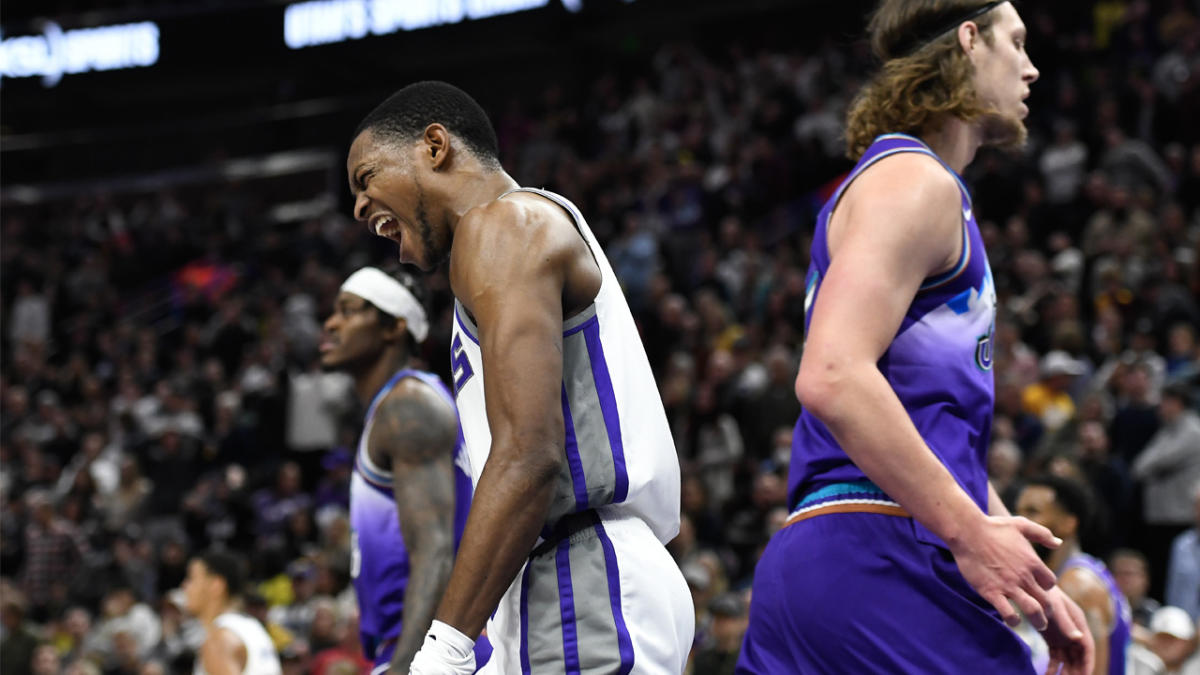 There is a new “King of the Fourth Quarter” in the NBA this season and his name is De’Aaron Fox.

“I’ve talked about it before, my teammates, they instill confidence in me to one, either go get my own. Or two, continue to create for others,” Fox told Morgan Ragan and Kenny Thomas on “Kings Postgame Live.” “You just go out there and you play your game, especially when you have guys on your team and the entire coaching staff that believes in you.”

And play his game, Fox did.

While Fox had 15 points after three quarters in Utah, it was the fourth quarter where the 25-year-old truly shined. In the final 12 minutes alone, the Kings star scored a career-high 22 points en route to a game-high 37 points.

Fox’s previous high in a quarter was 21 points, which he scored in the third quarter against the Atlanta Hawks on Nov. 11, 2018

The Jazz just had no answer for Fox, who had a dunk, a pull-up jumper from 18 feet and a layup that would ultimately seal a win for Sacramento in the game’s final moments.

“I kept telling him, we started out the fourth quarter, ‘We need you, we need you, turn up, turn up.’

Sabonis added that his job in the fourth quarter was to do everything possible to get Fox open in order for the Kings guard to lead the team to a win. After seeing Fox drain a handful of midrange jumpers, Sabonis knew that Fox couldn’t be stopped.

“What a game by Foxy,” Brown told reporters postgame. “He was good and I don’t want to praise him too much, reason being I’m telling you, that’s what that dude’s capable of.

“He had a big game for us on the road, but I’m telling you that’s De’Aaron Fox.”

Brown adds that it’s “great” that those around the NBA are finally noticing Fox’s greatness and that his star guard is just “scratching the surface.”

With this 22-point fourth-quarter outburst, Fox became the fifth player this season with 22 or more fourth-quarter points in a game. Fox’s fourth-quarter total was also the most by a Kings player since Isaiah Thomas (23) in 2021 against the Oklahoma City Thunder.

It was also Fox’s 10th game this season with 10-plus points scored in the fourth quarter.

That said, Fox said that instead of running plays that were overly complicated, he just stuck to simple plays that worked, especially late in the fourth quarter.

“You just kind of get into a zone, not necessarily that it slows down, but a lot of it is you pick where you want to get to, you try to get there and you shoot the shots that you work on,” Fox told reporters postgame. “So a lot of the fourth quarter had to do with that and it’s really as simple as that.”

While Fox gets a majority of the spotlight Tuesday night against the Jazz — and rightfully so — Sabonis had an impressive game in his own right. The Kings’ 6-foot-11 center got his 14th consecutive double-double with 21 points and 14 rebounds to go along with eight assists.

All five Kings starters scored in double figures while Lauri Markkanen led the Jazz with 28 points and eight rebounds.

RELATED: Why Fox should be named to the first All-Star Game this season

With how Fox has played in the fourth quarter this season, it’s becoming increasingly difficult to see him being left off the All-Star team this season.

Regardless of what happens though, the Kings know they have the ultimate gamer when it comes to the fourth quarter.

And his name is De’Aaron Fox.