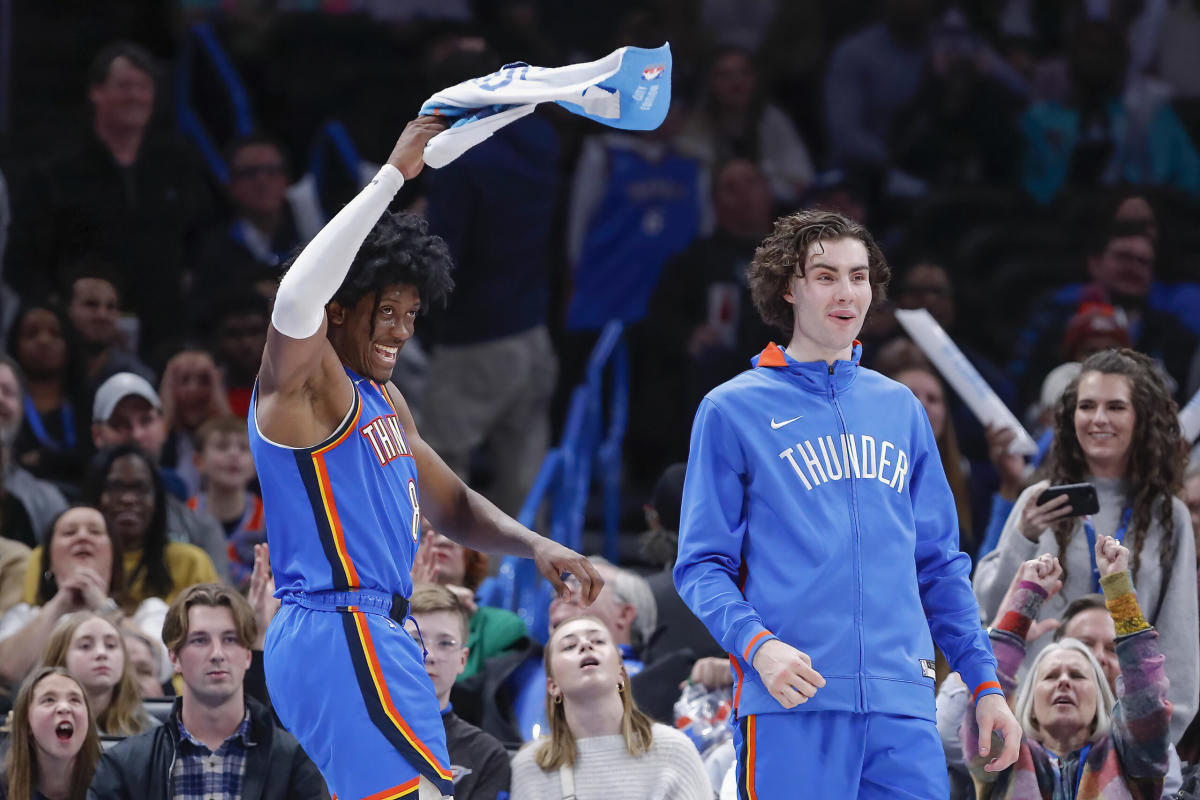 OKLAHOMA CITY — Well, that was fun.

In easily their most impressive win of the season, the SGA-less Oklahoma City Thunder were able to blowout the Boston Celtics in a historic display of offense, 150-117.

The Thunder set a franchise record for most points scored in a game at 150. The Thunder also finished with five players who scored at least 20 points, which is just the second time in franchise history. The Thunder also held a season-high 37-point lead at one point in this game.

The Thunder did all this without their best player and essentially their entire frontcourt! It was hard to believe what was actually happening at Paycom Center as it felt like everything was going perfectly for the Thunder throughout the night.

The Thunder shot an absurd 58-of-98 (59.2%) from the field and 20-of-40 (50%) from three. The Thunder also finished with 31 assists and did a great job at sharing the wealth among the 10 available players as seven scored at least 10 players with nobody surpassing 25 points.

The large patches of green among the OKC crowd slowly fizzled out as Thunder fans let their excitement be heard in the arena with a loud jolt of energy being injected into every other possession.

Overall, this was one of the more fun nights in the Mark Daigneault era and the fact that it happened against a title contender in the Celtics who entered the night with the best net rating AND without their best player makes it feel surreal.

To celebrate the impressive win, let’s hand out grades for the five 20-point scorers for the Thunder. Spoiler alert: It’s all A’s.

With Gilgeous-Alexander out due to a non-COVID illness, Josh Giddey filled in the scoring vacuum.

Giddey finished with a season-high 25 points on 10-of-15 shooting and went 3-of-5 from three as he continues to improve his three-point numbers. The 20-year-old also contributed with five assists and five rebounds.

Giddey was able to orchestrate one of the best offensive performances in Thunder history as he continues to build on his strong sophomore season.

Man oh man, where to start with Isaiah Joe?

Let’s start at the beginning.

After being a late training camp addition following being waived by the Philadelphia 76ers, Joe has legitimately played himself into a rotation spot with outside shooting and a well-rounded offensive game.

This was highlighted against the Celtics, where Joe finished with 21 points on 8-of-13 shooting and went 3-of-7 from three. Joe also contributed with four assists and four rebounds along with the dunk heard around OKC that sent the crowd into crazy mode.

There’s something about playing the Celtics at home that brings out the best in Tre Mann.

Mann finished with 21 points on 8-of-11 shooting and went 5-of-8 from three. Mann also contributed with six rebounds, three assists and three steals.

Not only did Mann put up stats, he’s also noticeably playing with more confidence as he digs deeper into his bags of moves tonight with various highlight plays.

While he was described as someone who could contribute right away due to his age and skill, not even the most optimistic JDub fans could have predicted this type of start to his rookie season.

Jalen Williams started off January with a bang as he finished with 21 points on 10-of-18 shooting. Williams did most of his damage inside the paint, as he scored 16 points on 8-of-9 shooting near the rim. This included a dunk that sent the crowd wild to end the third quarter.

Despite being the 12th overall pick, the Thunder might have found a gem in Williams.

Lost in all of the Mann and Joe hype was a solid night for Lu Dort.

Dort finished with 23 points on 8-of-15 shooting and went 3-of-6 from three. Dort also tied Mann for the highest plus-minus on the Thunder at a plus-31 in 28 minutes.