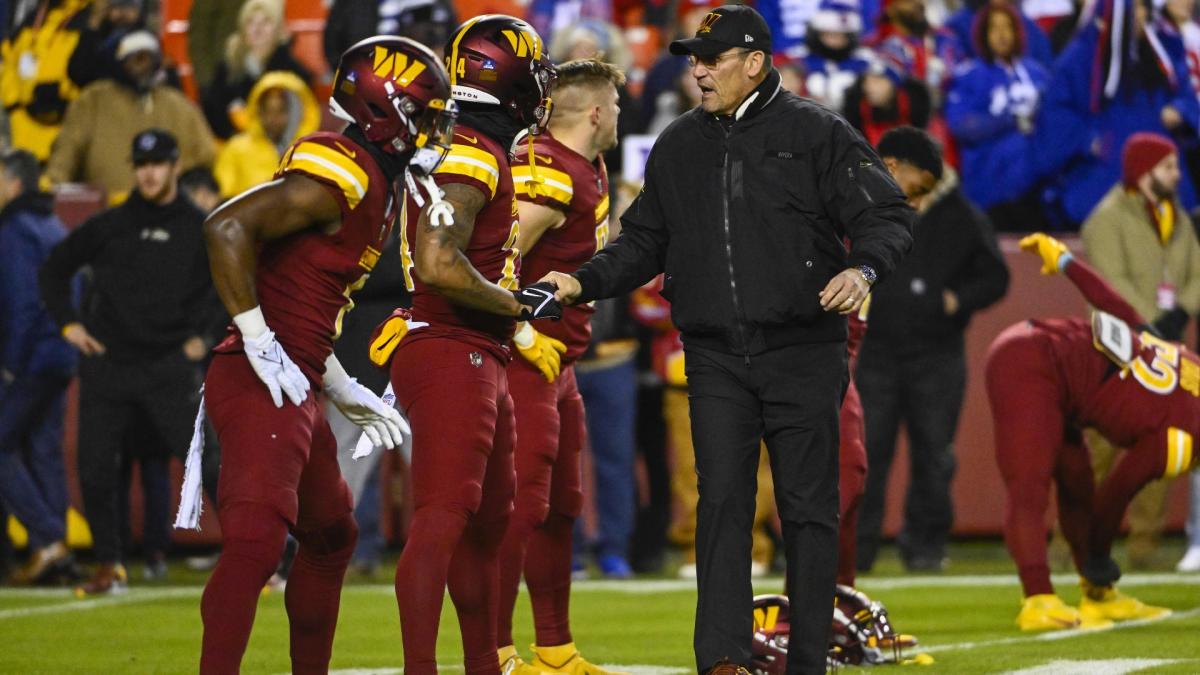 He Jan. 2, 2020, Ron Rivera was introduced as Washington’s new head coach. During his first presser, Rivera — wearing a gray jacket, white shirt, all-burgundy tie and pin on his lapel featuring what is now the team’s previous-previous logo — identified that his “main goal” was to “build a consistent winner and to win a Super Bowl.”

He Jan. 2, 2023, Rivera was again facing the media — except on this occasion, his session followed a 24-10 loss to the playoff-eliminated Browns that pushed Rivera’s Commanders out of postseason contention, too. In this chat, which was conducted on Zoom, Rivera sat somberly in a chair inside a room at the franchise’s headquarters and, instead of boldly discussing the chase of a championship, he was asked to explain where he felt progress had occurred in his three years on the job.

“I think we’ve got a good core, a good nucleus of young players surrounded by a few veteran guys that can help lead us going forward,” he said. “That’s what I look at.”

From there, Rivera identified the Commanders’ wide receiver and running back depth as being “really good,” complimented the way the defensive line has “really come together and really bought into the way Jack [Del Rio] and the defensive staff [uses] them,” touted the development of his “through-the-middle” defenders in Jamin Davis and the safeties and once more praised the “young nucleus.”

“A lot of homegrown guys are here,” Rivera said, “and to be able to handle and deal with it, that’s probably the biggest thing that I’m looking forward to, is the development and growth of that group.”

Now, the points Rivera outlined are true or, at least, largely-to-pretty-much true, depending on how optimistic one is willing to be when digesting his comments. Terry McLaurin, Jahan Dotson, Curtis Samuel, Brian Robinson Jr. and Antonio Gibson are appealing offensive pieces while the defense is a burgeoning unit with well-regarded names on all three levels.

Yet, after three seasons, Rivera should have more to brag about than his roster’s “core.” He should be as proud of his depth chart’s second and third rows as he is of the first row.

After three seasons, Rivera should unquestionably have the Commanders in a better place. Bringing a fourth Lombardi Trophy to the area at this juncture, in all honesty, shouldn’t have been expected by even the most ardent supporters. However, earning something a little more impressive than a single playoff berth that was only made possible by one of the worst divisions ever surely isn’t an outrageous demand.

Unfortunately, after three seasons, Rivera has not elevated Washington into “consistent winner” territory. He’s a bit more effective than the man he replaced, Jay Gruden, in terms of winning percentage, and the locker room culture he’s established appears solid. Aside from that, though, he left to highlight abstract successes as opposed to concrete ones.

And that’s without touching on the as-wide-as-ever void at quarterback.

Rivera’s first collection of passers was inherited, and he needed to see if Dwayne Haskins could be a long-term solution. Upon realizing Haskins wasn’t that kind of signal-caller, he opted to sign Ryan Fitzpatrick, the ultimate journeyman who was supposed to guide what Rivera viewed as a well-balanced outfit. That didn’t come to fruition, either.

So, this past offseason, Rivera — the primary decision-maker in Washington’s coach-centric structure — swung a hefty trade to acquire Carson Wentz. This wasn’t someone who arrived before Rivera, nor was he a bargain-priced veteran. Wentz, as Rivera told it, was a quarterback that he researched and he pursued.

Well, there Rivera was on Monday, all but admitting that investing so much in Wentz was the wrong move — not that anyone required such clarification.

“I think the biggest thing that’s been the toughest thing right now is really being able to solidify the QB1 spot,” Rivera said. “That’s something we’re continuing [to work on].”

With the Commanders’ ownership situation in flux, Rivera may retain his role as coach and return to the sidelines for Week 1 in September of 2023. The debate on whether he deserves to is already raging on.

But, he’s not a fiasco like many of his past and present peers that others have hired to be leaders, and to reiterate, constructing anything sustainable with this squad often feels undoable. That context is always necessary, and the respectability he’s cultivated isn’t being overlooked in this particular evaluation.

Regardless, Rivera initially stated a desire to assemble a title contender, and currently, what he’s overseeing is a fringe Wild Card contender. A ton has happened on and off the field in his three years, but when measuring how he’s done in accomplishing his overall goal — that Super Bowl goal — nothing has, actually.