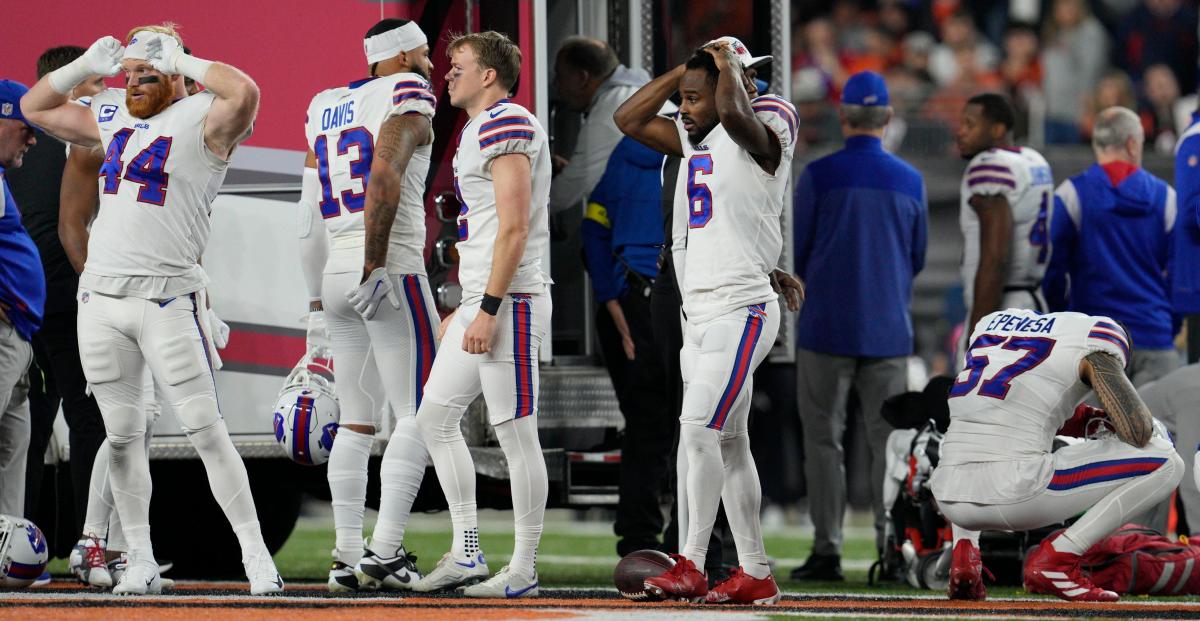 Hamlin collapsed with 5:58 remaining in the first quarter of the game, which was temporarily suspended then subsequently postponed. His heartbeat was restored on the field before he was transferred to the University of Cincinnati Medical Center for further testing and treatment, the Bills announced early Tuesday.

Hamlin’s uncle Dorrian Glenn shared a health update on Tuesday evening, marking the first time a family member has spoken about Hamlin’s condition to the media. Glenn said Hamlin is currently sedated on a ventilator to “try to get his lungs back to full strength.” Glenn told reporters there’s concern of lung damage, but he’s hopeful his nephew’s condition will improve.

“They sedated him just to give a better chance for him to just continue to heal better,” Glenn told CNN. “We are just taking it day by day. It seems like he’s trending upwards in a positive way.”

Glenn added that both of Hamlin’s parents are by his side.

A second-year player out of Pittsburgh, Hamlin tackled the Bengals wide receiver Tee Higgins after a 13-yard gain. It was a non-descript play. Hamlin stood up but collapsed to the ground.

An ambulance was brought onto the field. Hamlin was treated with CPR and an AED and placed on a stretcher before being transported to the hospital.

On Tuesday, NFL commissioner Roger Goodell announced the game would not be continued this week.

“Everyone in our community is praying for Damar Hamlin,” the NFL Players’ Association said in a statement Monday. “We have been in touch with Bills and Bengals players, and with the NFL. The only thing that matters at this moment is Damar’s health and well being.”

EXPLAINER: What is cardiac arrest? What is commotio cordis?

OPINION: After Hamlin’s cardiac arrest, the NFL had no choice but to suspend the game

OPINION: Bengals and their fans show ‘Football is Family’ after Hamlin’s collapse

Hamlin’s uncle says his nephew was resuscitated twice after collapse

Dorrian Glenn, the uncle of Hamlin, is shedding light on the critical moments after Hamlin collapsed following what appeared to be a routine tackle.

While speaking to reporters outside the University of Cincinnati Medical Center, Glenn told ESPN and CNN that emergency personnel resuscitated Hamlin twice — once on the field at Paycor Stadium and again at the hospital.

He said Hamlin is currently on a ventilator and laying on his stomach in what is known as a prone position to relieve pressure on his lungs.

Glenn was watching the “Monday Night Football” matchup from their hometown of Pittsburgh when Hamlin went down. He said the family drove down to Cincinnati immediately.

“I’m not a crier, but like I never cried so hard in my life,” Glenn recalled to CNN. “Just to know like my nephew basically died on the field and they brought him back to life, that’s just heartbreaking. To see all of those grown men crying and all the emotion, it was just a gut punch.”

Dan Orlovsky, who played 12 seasons as a quarterback in the NFL, said he was compelled to pray for Hamlin in the middle of ESPN’s “NFL Live” broadcast Tuesday.

“I’ve heard the Buffalo Bills organization say, ‘We believe in prayer.’ And maybe this isn’t the right thing to do, but it’s just on my heart to pray for Damar Hamlin. I’m going to do it out loud,” Orlovsky said as co-host Marcus Spears encouraged him to do so.

Orlovsky bowed his head and closed his eyes, alongside co-hosts Laura Rutledge and Spears, before leading a minute-long prayer on Hamlin’s recovery and well-being.

AND prayer vigil in honor of Hamlin was held for the public in Cincinnati.

Bengals kicker Evan McPherson spoke in a recorded message at the beginning of the vigil, encouraging fans to pray for Hamlin.

“I just want to take a second and realize that Damar is more than a football player,” McPherson said. “He’s a son, a teammate, a friend and last but not least, he’s a brother in Christ. He really needs our prayers right now.”

Hamlin’s college coach: ‘The entire country has your back’

University of Pittsburgh football head coach Pat Narduzzi, who Hamlin played for from 2016-2020, described Hamlin as “a hero to thousands of Pittsburgh kids.”

“Damar, we love you. We are praying for you. Pittsburgh’s always had your back. And now it’s obvious the entire country has your back, too,” Narduzzi tweeted on Tuesday.

Every team in the NFL joined together in solidarity on Twitter for Hamlin, changing their respective profile pictures to a royal blue image that says, “Pray for Damar.” The logo also features No. 3, Hamlin’s jersey number for the Bills.

The NFL and NFL Players’ Association (NFLPA) also changed their profile pictures, writing, “For Damar” and “We’re with you Damar,” respectively.

On Tuesday, Hamlin’s family released a statement, saying “your generosity and compassion mean the world to us.” The family said they would pass along updates on his status as they have them.

“We are deeply moved by the prayers, kind words, and donations from fans around the country,” the statement said. “We also want to acknowledge the dedicated first responders and healthcare professionals at the University of Cincinnati Medical Center who have provided exceptional care to Damar. We feel so blessed to be part of the Buffalo Bills organization and to have their support.”

NFL Executive Vice President of Football Operations Troy Vincent said Bills and Bengals players were “traumatized” by what they witnessed on the field, and both teams were in alignment about not finishing Monday’s game.

“There was no time period for the players to get warmed up,” Vincent said. “Frankly, the only thing that we asked was that (referee Shawn Smith) communicate with both head coaches to make sure they had the proper time inside the locker room to discuss what they felt like was best.

“So, I’m not sure where (the thought that the game would quickly resume without a break) came from. Five minutes, warm-up, that never, never crossed my mind, personally. And I was the one — I’ m saying ‘I’ not to be selfish, but the one that was communicating with the commissioner. It never crossed our mind to talk about warming up to resume play. That’s ridiculous. That’s insensitive, and that’s not a place that we should ever be in.”

Some players were on their knees, while others openly wept.

After Bills head coach Sean McDermott met with his Bengals counterpart Zac Taylor, both teams left the field and referee Shawn Smith announced that the game had been temporarily suspended.

“Neither coach, frankly, was talking about resuming play and the players weren’t. … It was really about Damar,” Vincent, who played in the NFL from 1992-2006, said on the conference call. never seen anything like it since I’ve been playing. So immediately my player hat came on. How do you resume play after you have seen such a traumatic event occur in front of you in real time. And that’s the way we were thinking about it. The commissioner and I and others.”

What transpired was traumatic for every player in the NFL. The league office recognized that.

In a memo addressed to the leadership of all clubs, Goodell recapped that night’s main events and offered additional mental health support from the league.

Each team’s director of player engagement and team clinician heard from NFL vice president of wellness and clinical services Nyaka NiiLampti about existing resources in place as well as additional on-site options if requested.

The game will not resume this week

Cameras showed the two coaches meeting once again in the stadium’s tunnel (and passed a cell phone between each other) and players started coming out of the Bills’ locker room. Bengals captains Joe Burrow, DJ Reader, Ted Karras and Joe Mixon went towards the locker room as well. Before the official announcement from the league, the Bills’ equipment staff began packing up the sideline. Finally, at 10 pm ET — one hour and five minutes after Hamlin collapsed — the game was called.

There was no information on whether the game would be continued. Asked by reporters how the game could be rescheduled, NFL VP of communications, public affairs and policy Jeff Miller declined to provide a contingency plan and desired to keep the emphasis on Hamlin’s condition.

“Not in consideration right now,” Miller said. “Our concern is with the player and his well-being. At the appropriate time I’m sure we’ll have a conversation about the next steps regarding the game.”

On Tuesday afternoon, Goodell announced that the game would not be resumed this week. The NFL has made no decision regarding a potential resumption at a later date.

Did the NFL give teams 5 minutes to warm up after the Damar Hamlin incident?

At one point, the broadcast reported that teams had five minutes to warm up prior to the restart of the game. On the conference call later that night, Vincent said he did not know where that figure came from since the game was not going to continue.

“I’m not sure where that came from,” Vincent said. “Frankly, there was no time period for the players to get warmed up. Frankly, the only thing that we asked was that (referee) Shawn (Smith) communicate with both head coaches to make sure they had the proper time inside the locker room to discuss what they felt like was best. So I’m not sure where that came from. Five-minute warmup never crossed my mind, personally.

“It never crossed our mind to talk about warming up to resume play. That’s ridiculous. That’s insensitive. And that’s not a place that we should ever be in.”

In a statement Tuesday, ESPN said: “There was constant communication in real time between ESPN and league and game officials. As a result of that, we reported what we were told in the moment and immediately updated fans as new information was learned. This was an unprecedented, rapidly-evolving circumstance. All night long, we refrained from speculation.”

Joe Buck told the New York Post the information came from ESPN’s rules expert John Parry, who was in communication with the league (and was actually the one who relayed the news that the game had been temporarily suspended).

The Bengals lead 7-3 in the first quarter of the game between two teams vying for the top playoff seed in the AFC.

Cincinnati entered at 11-4 and leading the AFC North by one game over Baltimore, while AFC East champion Buffalo was 12-3.

Hamlin, 24, was a local standout who attended the University of Pittsburgh from 2016-2020. He led the Panthers in tackles and passes defended during his final season and was named All-ACC second team. The Bills selected him in the sixth round of the 2021 draft, and he appeared in appeared in 14 games his rookie season.

Hamlin took on a much larger role during the 2022 season and has started all but the first two of Buffalo’s games this season.

What is the NFL’s emergency action plan?

Each week, the league runs through its emergency action plan with all 32 clubs, Vincent said. Every stadium rehearses a medical situation such as this one annually. The plan was also brought up at the pregame meeting between coaches.

Part of the plan involves having a Level 1 trauma center — designed to address the most serious medical emergencies — active in each home market. The plan also calls for an ambulance in each stadium, as well as an airway management physician on-site.

Several Bills players remained in Cincinnati to be close to Hamlin. The rest of the team returned to the team’s headquarters in Orchard Park, New York, early Tuesday morning.

Some members of the Bengals, including head coach Zac Taylor, stopped by the hospital to continue offering support.

“We also want to thank Coach Taylor and the Bengals for everything they’ve done,” Hamlin’s family said in their statement.