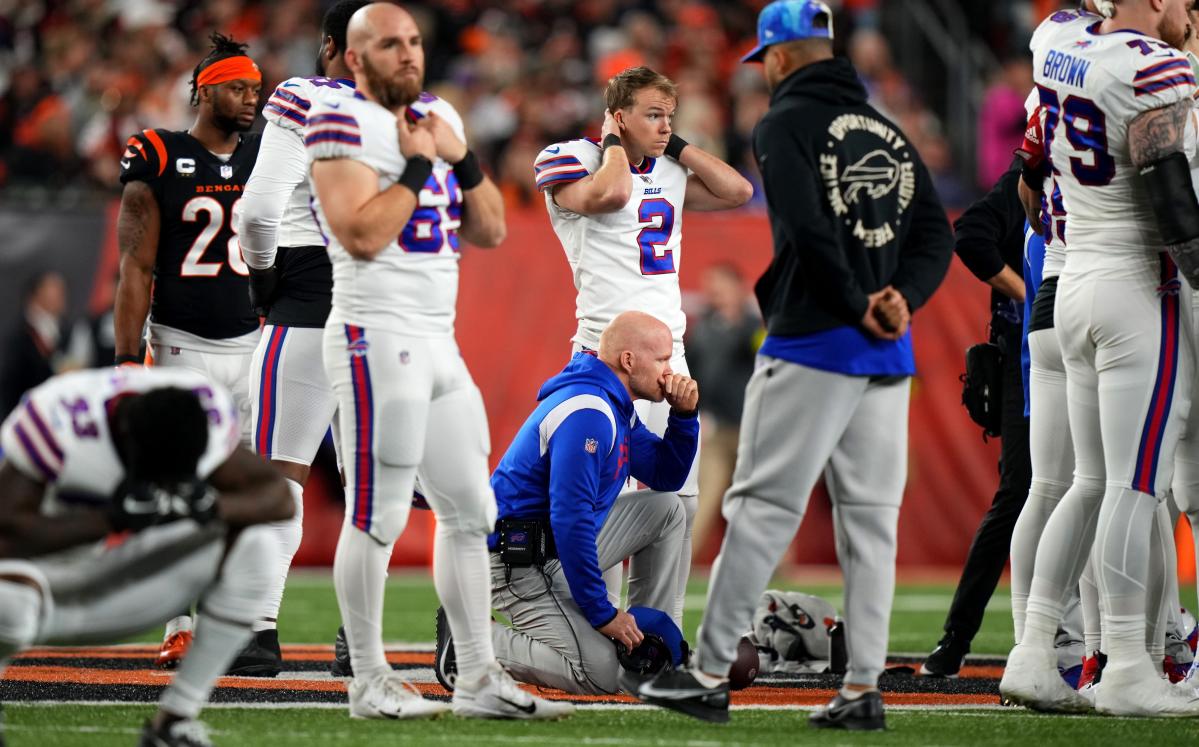 Buffalo Bills player Damar Hamlin remains hospitalized in Cincinnati, after suffering cardiac arrest during a game against the Bengals on Monday night.

The Bills’ second-year safety remains in critical condition, as the team and the NFL continue to provide updates as they become available.

The NFL community and fans continue to pour out their support for Hamlin as well since his horrific collapse during the Bills-Bengals game.

Hamlin was hit in the chest during a routine play with Bengals receiver Tee Higgins. He stood up after the hit, but quickly fell backwards onto the field, causing a stoppage in play. He was taken to the University of Cincinnati Medical Center near the Bengals’ stadium.

Here’s the latest information as it becomes available on Hamlin as of Wednesday:

Hamlin remains sedated and on a ventilator in the intensive care unit, his uncle said in another interview with NFL Network.

Hamlin had to be resuscitated at least twice. Those occurred once on the field after the play, and another time after he arrived at the hospital, his uncle told ESPN.

“It was pretty scary to see that,” Glenn told ESPN reporter Coley Harvey outside the medical center. “It was really scary.”

“So, it was impactful to see that. My heart will go out no matter who it was, but for it to be my nephew, it was chilling.”

Bills give updates on Damar Hamlin

In two announcements on Tuesday, the Bills said Hamlin suffered a cardiac arrest and his heartbeat was restored on the field before he was transported to a medical facility. He spent Monday night in intensive care, and remained in critical condition.

“We are grateful and thankful for the outpouring of support we have received so far,” the Bills said.

As of Tuesday night, more than $6 million have been donated it a GoFundMe page Hamlin started to raise money for a toy drive in his hometown near Pittsburgh.

Donations began to flood following his injury during the “Monday Night Football” game.

“A lot of people don’t get to see how loved they are while they’re alive, so for him to have a situation where he could have been taken away and he has a chance to come back and see all that love that he got, it’s truly an amazing thing,” Hamlin’s uncle told NFL Network of the outpouring of donations.

“I can’t wait to see all the love and support people have for him.”

The Cincinnati Reds, whose stadium Great American Ballpark is less than a mile from the Bengals’ Paycor Stadium where the incident occurred, provided a scoreboard tribute for Hamlin on Tuesday.

Drivers passing by the Reds’ home stadium saw “Prayers for Damar Hamlin” with a photo of Hamlin with a background in Bills’ blue.

“The entire @MiamiDolphins family is with you @HamlinIsland and @BuffaloBills #billsmafia,” Dolphins CEO Tom Garfinkel posted on Twitter.

What is cardiac arrest?

The NFL confirmed to USA TODAY an AED (automated external defibrillator) was used on the field before Hamlin’s heartbeat was restored.

He was then transferred to the University of Cincinnati Medical Center for further testing and treatment as he was sedated and clinging to life.

Thigh what is cardiac arrest, and how might it have happened to Hamlin?

The NFL and all 32 teams changed their Twitter profile pictures, removing their respective team logos and replacing it with a dedication to Hamlin.

The words “Pray for Damar” resting on top of the number three, which is Hamlin’s jersey number, in Buffalo Bills colors made the rounds on Twitter on Tuesday afternoon.

The NFL announced Tuesday there will not be a continuation of the “Monday Night Football” game that ended abruptly after Hamlin’s incident. It will not be played this week.

The game concluded with 5:58 left in the first quarter, with implications on playoff seeding.

The NFL has made no decision regarding the possible resumption of the game at a later date.

The league has not made any changes to it Week 18 regular-season schedule, which has the Bengals hosting the Baltimore Ravens, while the Bills host the New England Patriots. Both games are scheduled for Sunday.

On Tuesday, Hamlin’s family released a statement, saying “your generosity and compassion mean the world to us.”

“We are deeply moved by the prayers, kind words, and donations from fans around the country,” the statement said. “We also want to acknowledge the dedicated first responders and healthcare professionals at the University of Cincinnati Medical Center who have provided exceptional care to Damar. We feel so blessed to be part of the Buffalo Bills organization and to have their support.”

University of Pittsburgh football head coach Pat Narduzzi, whom Hamlin played for from 2016-2020, showed his support for his former player in a statement released Tuesday.

“Damar Hamlin is far more than just a football player. He’s a loving son, brother and friend. Damar is a hero to thousands of Pittsburgh kids,” Narduzzi tweeted.

“Damar, we love you. We are praying for you. Pittsburgh’s always had your back. And now it’s obvious the entire country has your back, too.”

During the game broadcast, ESPN announcer Joe Buck relayed that both teams would have five minutes to warm up and resume play. This happened before both teams left the field into their locker rooms, and the game was ultimately stopped.

NFL Executive Vice President of Football Operations Troy Vincent said Bills and Bengals players were “traumatized” by what they witnessed on the field, and both teams were in alignment about not finishing Monday’s game.

“I’m not sure where that came from. Five minutes, warm-up, that never, never crossed my mind, personally,” Vincent said in a conference call after the game Monday. “And I was the one – I’m saying ‘I’ not to be selfish, but the one that was communicating with the commissioner. It never crossed our mind to talk about warming up to resume play. That’s ridiculous. That’s insensitive, and that’s not a place that we should ever be in.”

In a statement Tuesday, ESPN said: “There was constant communication in real time between ESPN and league and game officials. As a result of that, we reported what we were told in the moment and immediately updated fans as new information was learned. This was an unprecedented, rapidly-evolving circumstance. All night long, we refrained from speculation.”

Joe Buck told the New York Post that the information came from ESPN’s rules expert John Parry, who was in communication with the league (and was actually the one who relayed the news that the game had been temporarily suspended).